1: Depth Of Field
One powerful method of controlling the appearance of the background is controlling how sharp it appears in the image. As we’ve discussed earlier, the aperture setting controls the “depth of field”, or how much appears sharp in a photograph. Let’s take a closer look at exactly what “depth of field” is.

When a camera’s lens is focused, there is a single, thin plane of absolute focus, so when you focus your camera on a subject, you’re actually focusing on a single plane. But not all subjects are flat, right? There is an area in front of and behind that plane of absolute focus which also appears sharp. This area is called “depth of field”, and can be roughly divided into thirds - one third in front of the focused distance, and two thirds behind it (a bit more on that in a moment).

4: With any given subject magnification, all lenses set at any given aperture will yield the same depth of field
Although this may not be immediately apparent in the final images when compared side by side, a closer look will prove it. Longer lenses incorporate a smaller amount of the background, so this smaller area may look more blurry when compared to the same image taken with a wider lens, but if you look at the same background area of the wider lens photo, you’ll notice that it is just as out of focus (or sharp) as the same area covered by the longer lens.

5: The aperture marked on your lens may not be the aperture you’re actually shooting with
Many lenses, zoom lenses in particular, will “shift” the aperture as you zoom. For example, there are many 70mm-210mm lenses that, when set at f8, are shooting at f8 at 70mm, but they’re shooting at f11 when you zoom the lens out to 200mm. So, when zoomed to 200mm, you’re actually shooting at an aperture setting of f11, and you’re getting the equivalent depth of field of f11, regardless of what the aperture ring on the outside of the lens indicates. Most modern cameras with internal aperture displays will automatically adjust for this and display the “updated” aperture. Another case where this is common is with close-up work. When you focus a lens closer, there is a space added between the lens’ elements and the camera body. This space is known as “extension”, and the more extension you add, the more light lost. For example, if I have a 50mm lens, and I place 50mm of extension between that lens and the camera body, I’m focusing very close (life-size on the negative!), but I’m also losing 2 stops of light, so if I have my lens set at f11, I’m actually shooting at f22, but I’m getting the additional depth of field of f22 (which I’m going to need because I’ve gotten so close to my subject - see point #3 above.) 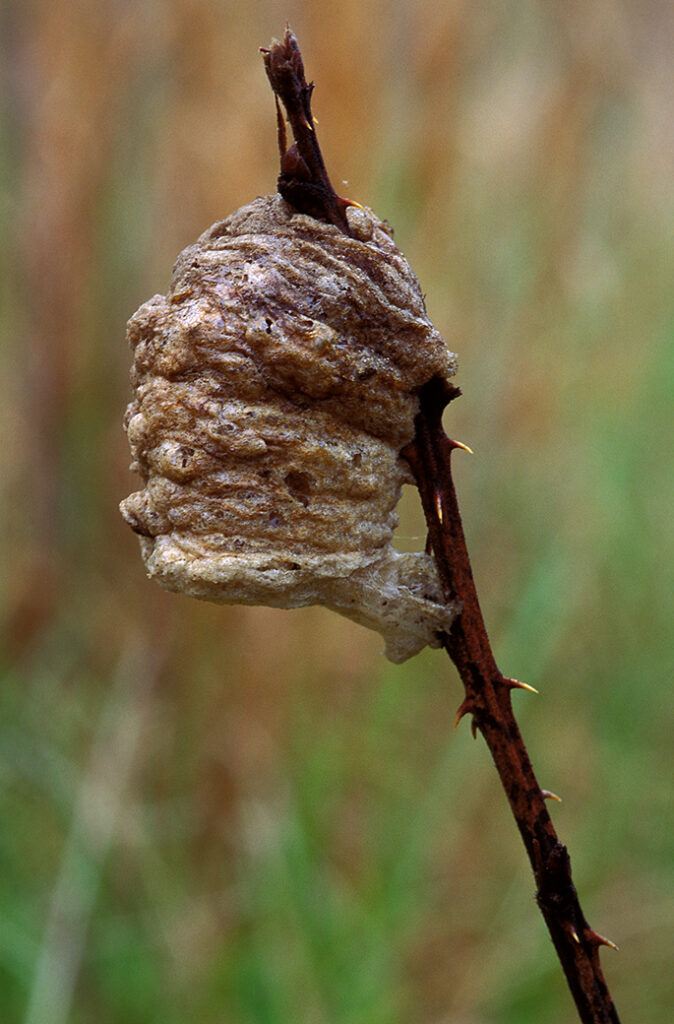 This image was shot at an aperture setting of f16. The background is blurry, but there is still enough detail to make it distracting. 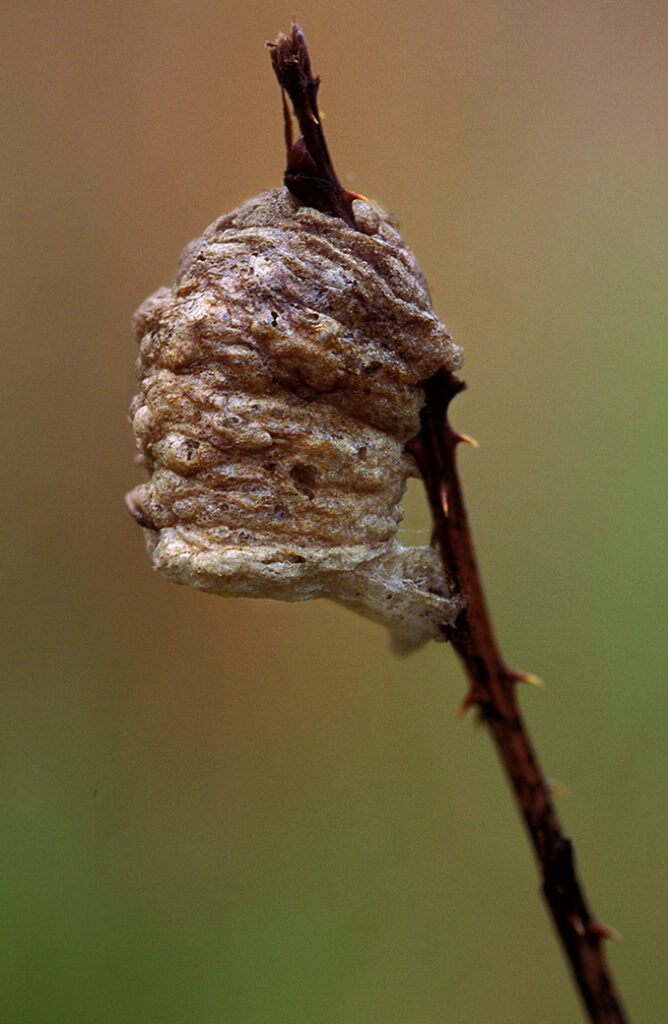 This is the same image shot with an aperture setting of f5.6. Now the background is a muted blur and does not compete for attention.

Getting Maximum Depth of Field
We discussed earlier how the depth of field can be divided roughly into thirds - one third in front of the focused distance, and two thirds behind, but where would that knowledge come in handy? Let’s say that you want to take a scenic shot of a mountain range, and you want to include the flowering plant that’s a few feet away in the composition. You know you need an aperture that will give you as much depth of field as possible - but do you focus on the mountains or on the plant? If you focus on the plant, you won’t get enough depth of field to render the mountains sharply, and if you focus on the mountains, your plant will be blurry, but consider this: if you’ve focused on the mountains, probably the “infinity” focus setting of the lens, and you know that two thirds of your depth of field falls behind you subject, what’s beyond infinity? Nothing, so you want to focus the lens at a distance where “infinity” is the rear limit of the depth of field, which will also give the most depth of field possible in front of that distance. This is the “hyperfocal distance”, the focused distance that will yield maximum depth of field for an image such as that. How, you may ask, do you determine what the “hyperfocal distance” is? There are three ways: 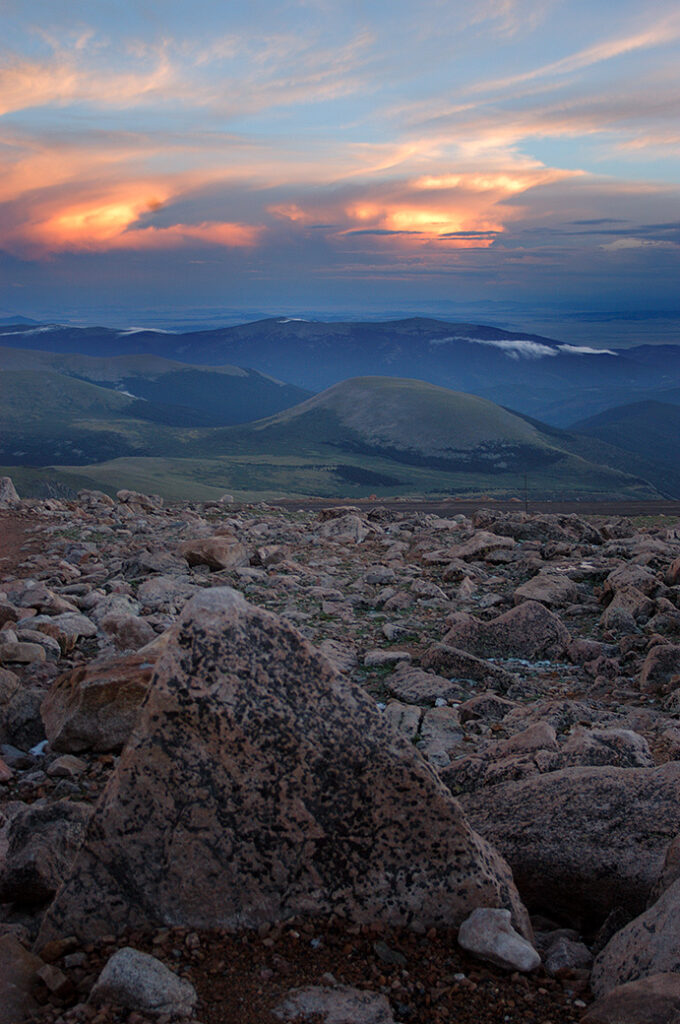 By focusing 1/3 into this scene and using a small aperture, the rock in the foreground and the clouds on the horizon all appear sharp. 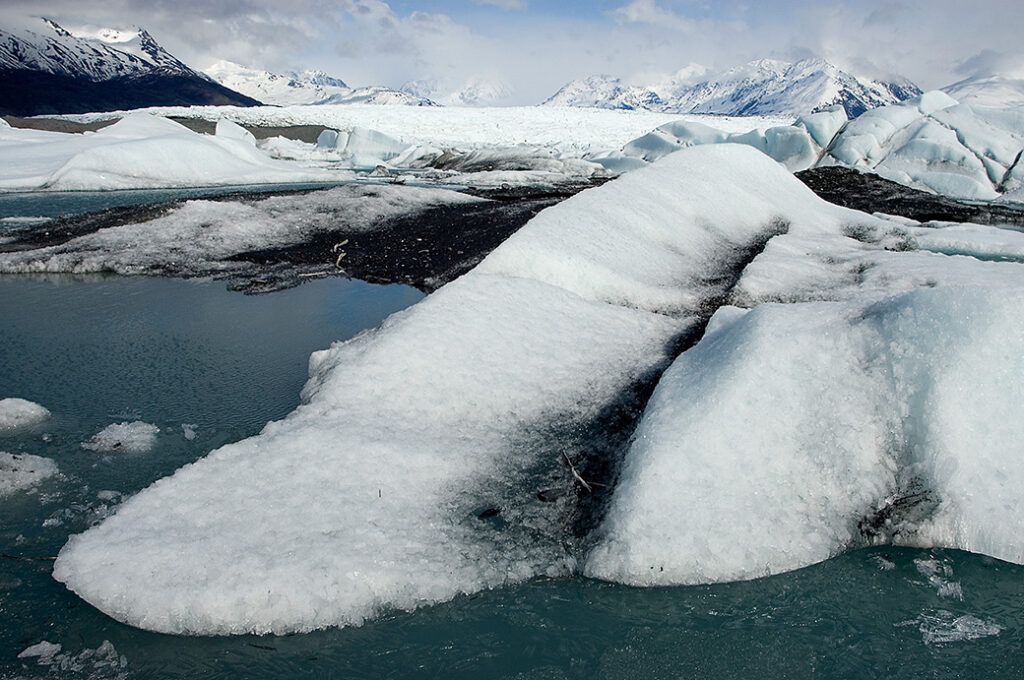 Another example of maximizing depth of field.

2: Select The Background
Controlling the depth of field is one way to alter the appearance of the background, but in many cases, a slight shift can supply a completely different background producing an entirely different image. This is especially true when using long lenses, where the field of view is more narrow. 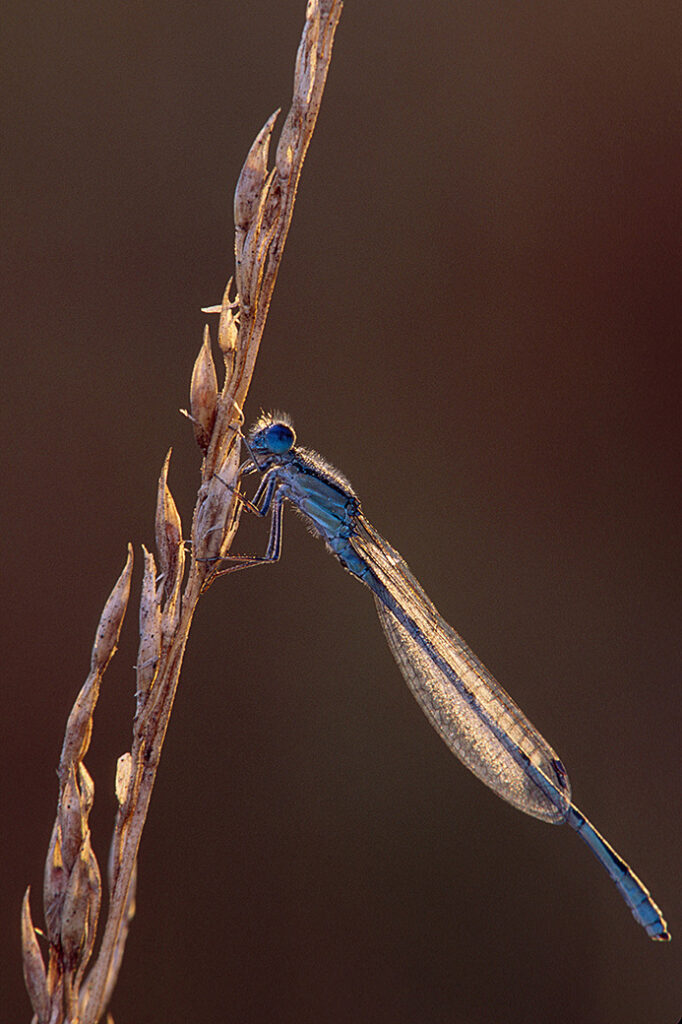 This dragonfly stands out pretty well against the dark, muted background. 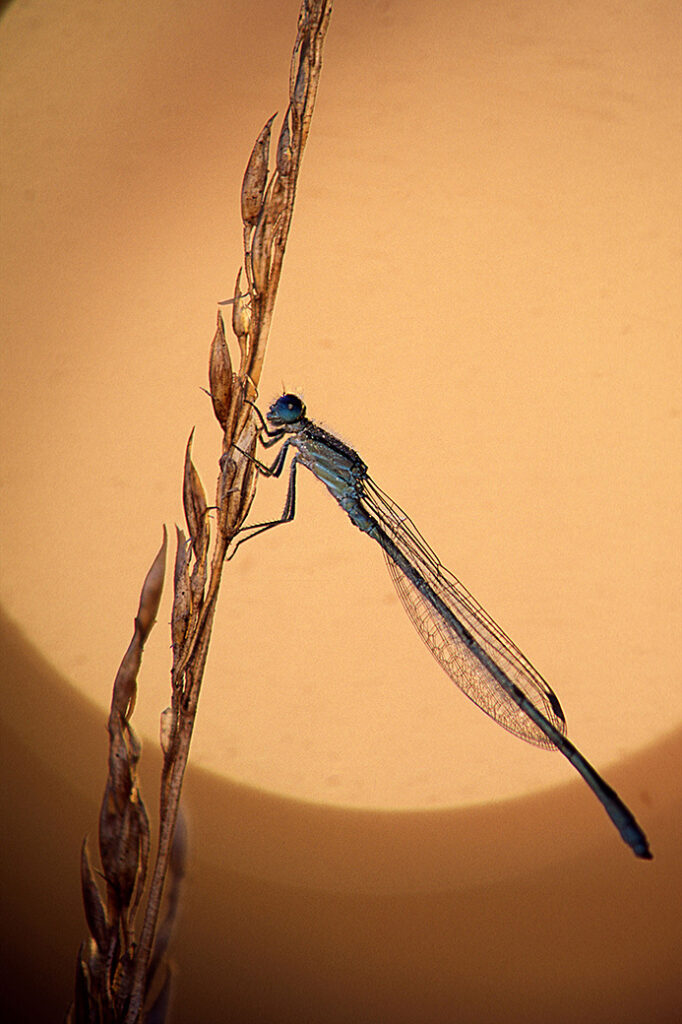 A slight shift to include a glare from a pond creates an entirely different image with a completely different feel. 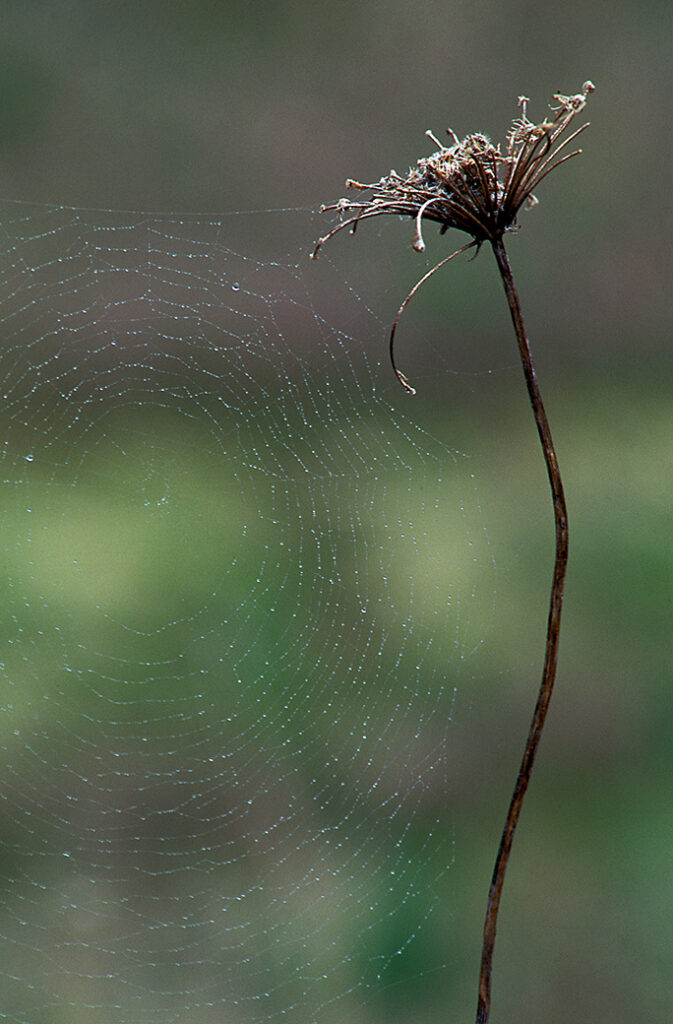 This spiderweb is barely visible against the bright background... 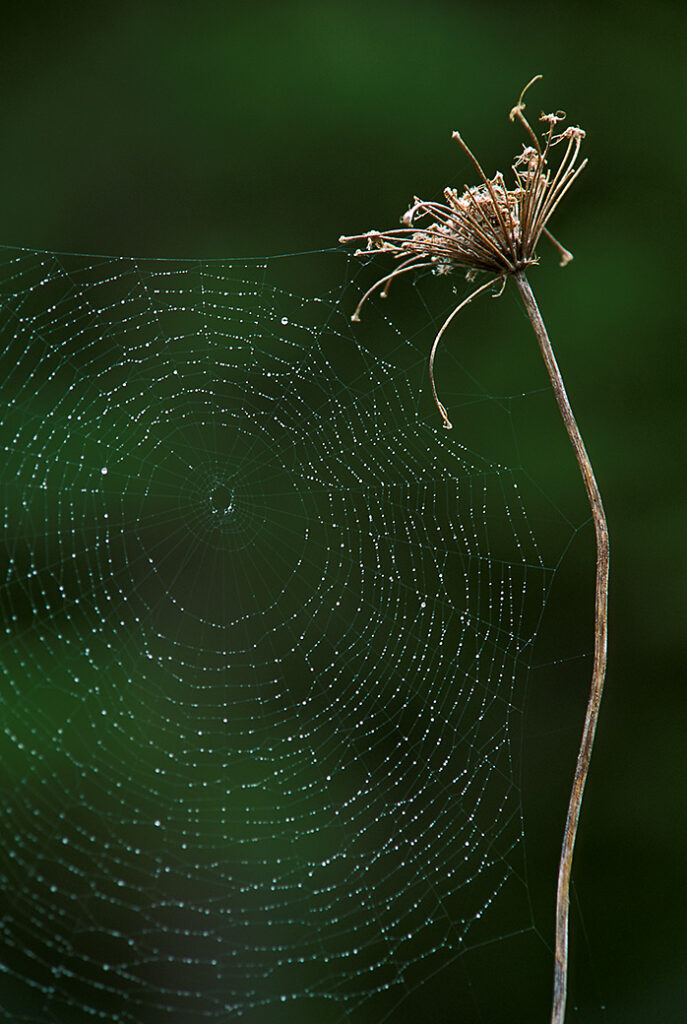 ...but a slight shift placing the web against a darker background makes it stand out much better.

4: Selective Gardening
Sometimes it's just a matter of cleaning up the background and/or surrounding area of the subject. Keep in mind that the photograph reaches out to every corner, and anything that's within those corners becomes part of the photograph. Whenever possible, remove anything that distracts from the message you want your image to convey. 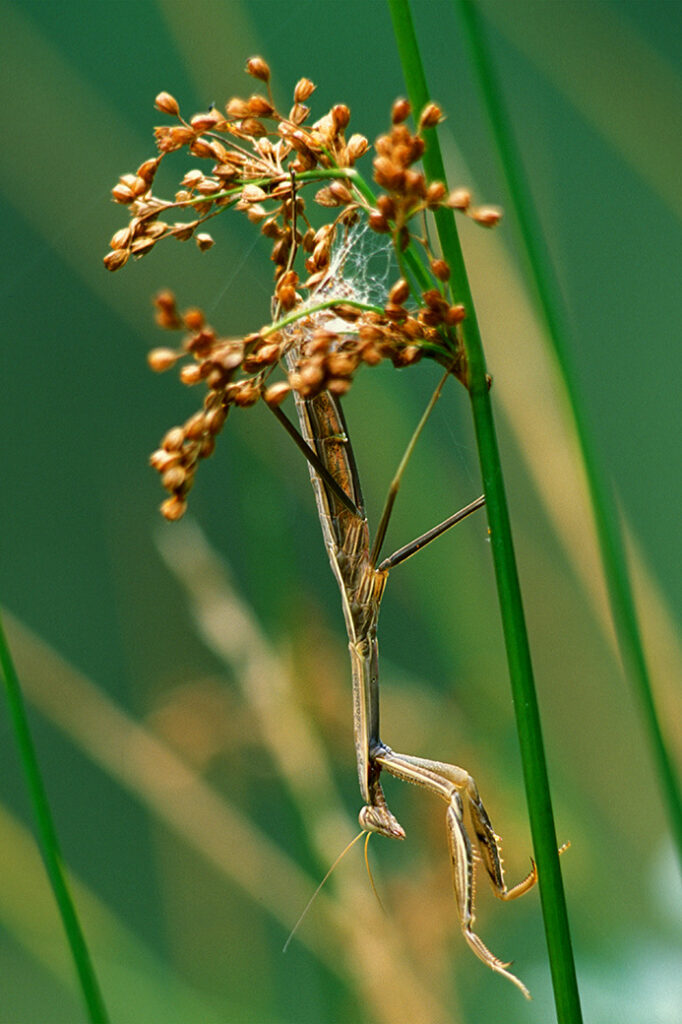 The background in this image is cluttered and busy, arguing with the subject for attention. 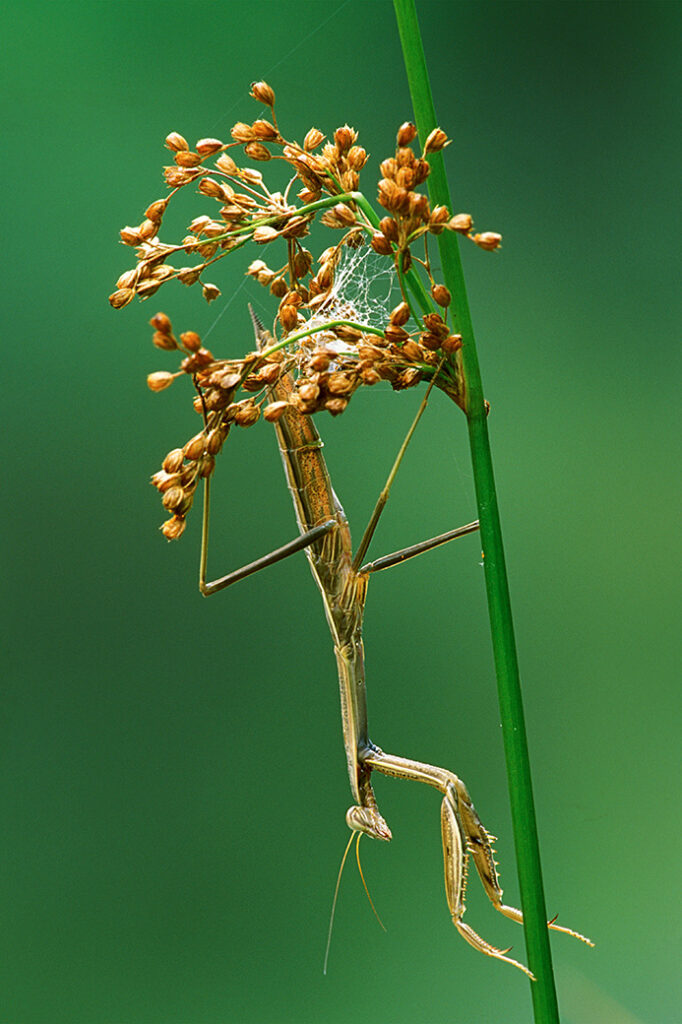 Some simple selective gardening, removing the dead reeds and branches from the background, creates a cleaner image allowing the subject to stand out.

What's Next? An In-Camera Method To Check Exposures.