Special Considerations
Success in macro photography requires precise technique. The slightest camera movement records as huge shakes, depth of field is measured in fractions of an inch instead of feet, and simply composing and positioning the camera is, in itself, a challenge. Attention to every detail is a must. Here are several techniques that should make things a bit easier:

Tripod
I’ve said that a tripod is desirable for any kind of photography – but for existing light macro photography, it’s a must.
Refer to my post in Photography 101: 06: Tripods – Required? No…..I Mean…..YES for features to look for in a good tripod.

Focus
When working close-up, one thing you may have difficulty with is focusing. Trying to focus in the usual way. by adjusting the focus of the lens, drastically alters the composition – or, depending on the method used to gain magnification, it doesn’t seem to work at all. When shooting close-ups. the easiest way to focus is to move the entire camera/lens assembly in and out until the subject is in focus. Turning the focusing ring (or using auto-focus) actually changes the magnification rate, which changes your composition. In addition, when using diopters or extension tubes, the focusing range of the lens itself is limited. Determine the magnification rate you want, and move the camera in and out until the subject is in focus. This can be difficult at times, moving an entire tripod assembly a fraction of an inch can be a challenge. Fortunately, there are accessories available that make this less frustrating. A focusing rail (or “Macro Focusing Rail”) is an accessory that mounts between the tripod and the camera and provides a moveable rail that the camera mounts to. Focusing the camera is then a matter of turning a small knob that moves the camera/lens assembly precisely.

Camera Alignment
The higher your magnification rate, the more shallow your depth of field. Even shooting something at 1/4X, your depth of field is minimal, even at small apertures. This is great for creating muted, out-of-focus backgrounds, but makes it difficult to get all of your subject in focus. One good method to maximize the depth of field for your subject is to align the camera so that the film plane is as parallel as possible to the subject.

To keep both Mountain Laurel blossoms and the fern in focus,
I positioned the camera so that the film plane (sensor) was as
parallel as possible to them.

The Eyes Have It
When shooting any type of wildlife – macro or not – keep the eyes in focus. When viewing a photograph of a living being, people want to make eye contact – and if the eye in the photograph is in focus, the composition makes sense – even if there are portions of the subject that aren’t entirely in focus. A photograph of, say, a bird, with the wings tack sharp – but the eye out of focus – comes across as a mistake. 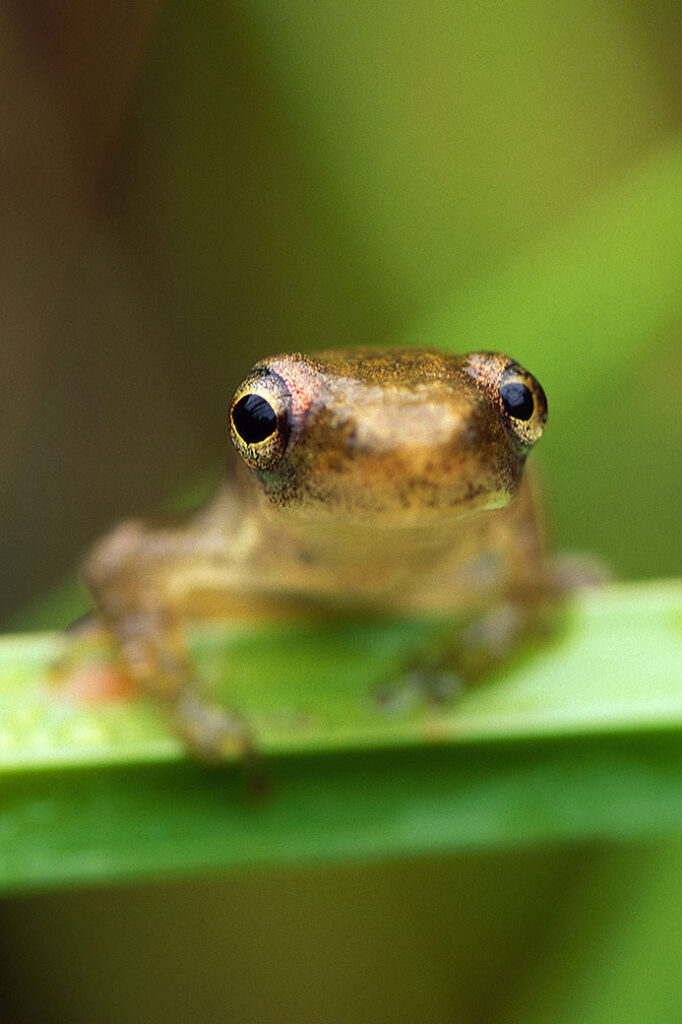 As small as this little guy was, I couldn’t get enough depth of field
for this head-on shot to keep everything in focus, but with the eyes sharp,
the rest of the image that is blurry isn’t quite so noticeable.

Prop It Up
Amplified camera shake due to high magnifications, light loss due to extension, use of smaller apertures for depth of field – Macro photography. by its nature, requires exposures that are longer than normal, which can be a challenge in the field. The slightest breeze can make that flower that you’re trying to photograph sway back and forth just enough to guarantee a nice, blurry image. When shooting anything that is on any type of stem, I like to prop that stem whenever possible. A small stick, whatever, just outside of the frame may be all it takes to get that flower to stand perfectly still.

Lock It Up
When shutter release is pressed, the camera begins a vast array of functions – the lens stops down, the mirror moves up out of the way of the shutter, the shutter opens and closes. These are all moving parts – the largest and most “violent” being the motion of the mirror. “Mirror Slap” is a term used to describe the camera motion caused by the mirror rapidly flipping up to allow light to reach the sensor, and it can actually cause enough camera motion to blur an image – especially at medium-slow shutter speeds (1/15 sec – 1/4 sec). These speeds are slow enough to record the motion, but not slow enough to let the camera settle down for the majority of the exposure – the result, blurry images. A couple of things can be done to prevent this:

1: Mirror Lock-Up
Some cameras have a “mirror lock-up” button or switch which, as the name implies, locks the mirror in the up position, eliminating any mirror motion during the exposure.

3: Live View
Some DSLRs allow the user to use the camera’s monitor instead of the viewfinder to preview the image (especially DSLRs that have a video mode). Using this feature moves the mirror out of the way to allow the sensor to provide the preview. Although the extended use of the monitor drains batteries a bit faster, it gets rid of mirror slap.

Hands Off
The best method to prevent camera motion caused by handling the camera during an exposure is to keep your hands off the camera during the exposure. A cable release or remote release (a mechanical, wired, or wireless electronic device that allows you to trip the shutter without handling the camera) is almost a must for macro photography. Personally, I prefer a cable release (get a good one) or wired remote for this – I just have more confidence in a hard-wired system then trusting a radio or line-of-sight wireless remote. Wireless remotes, however, can be a bit more flexible in that you can release the shutter from further away – so if you’re wanting that picture of a snake when he pops his head out of a hole, you can be comfortably away when he does. With some camera manufacturers, however, the wireless system is line-of-sight (meaning there must be a clear, strait path between the transmitter in your hand and the receiver on the camera) and receiver for the remote is on the front of the camera, so you have to be in front of the camera to activate the shutter – great for self portraits or group shots you want to be in, not so great otherwise. Another technique, especially for subjects that don’t move, is to use the self timer feature, which creates the exposure a few seconds (depending on setting) after the release is pressed. Better yet, use the Exposure Delay Mode (as mentioned above), if your camera has one, which gets your hands off the camera as well as eliminate mirror slap.

Less Is More
By its nature, macro photography concentrates on smaller, finer details. Simplifying your composition as much as possible will usually create a more stunning image. Cleaning up foregrounds, backgrounds and surrounding areas of a composition is important with any photograph, but even more so with a close-up. It’s kinda automatic – when shown a photograph of a small detail, people will look for small details. 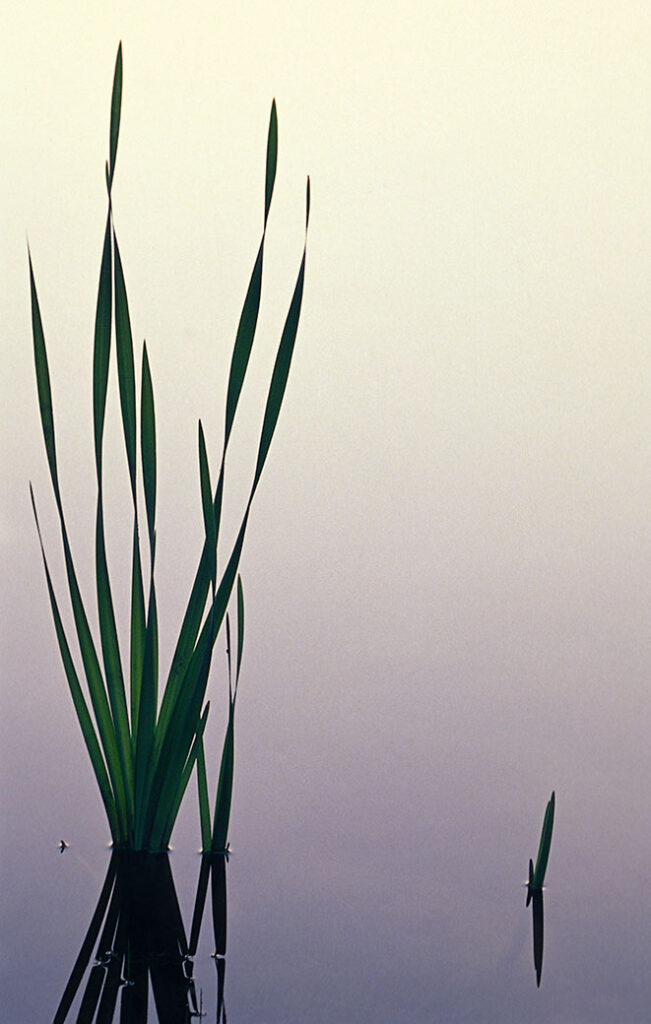 The clean composition of these Cattails
in a dead-calm pond is what makes this image work. 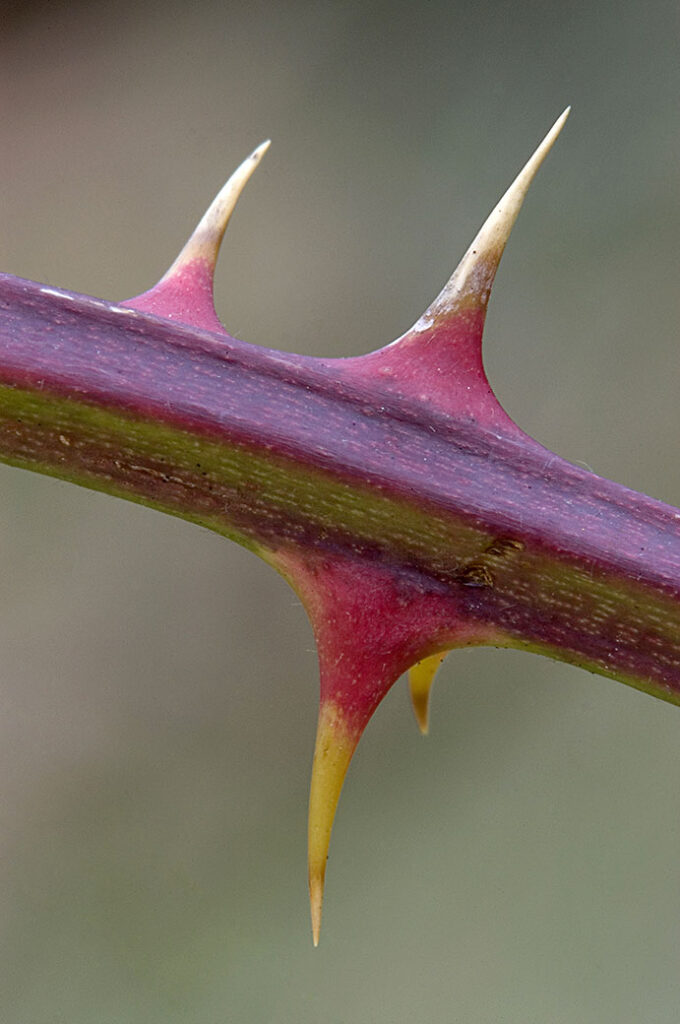 I wanted a shot of thorns, but I didn’t want
any distracting leaves or branches. I had to
look for a while until I found a clean example
of what I wanted.

Get Close – Maybe Closer
Developing an eye for macro photography takes a bit of practice, but when you start noticing noticing things in more detail, you’ll find that those details have details themselves. Butterflies are beautiful, and the patterns on a butterflies wing are beautiful, and each individual scale that creates those patterns can be beautiful. Patterns, in particular, are a good thing to keep an eye out for when getting in close. 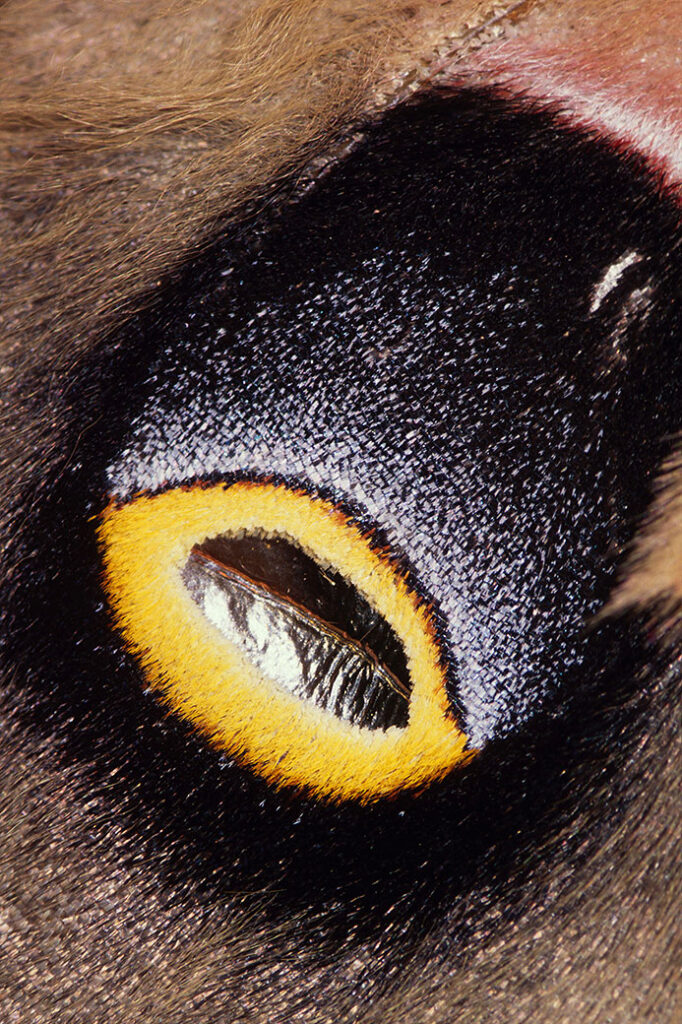 Detail of a Polyphemus Moth wing. The moth itself is a
great subject – but the small details of the moth
offer their own photo opportunities.

Up Next – Fun With Flash!